My Family Ties To The Little League World Series 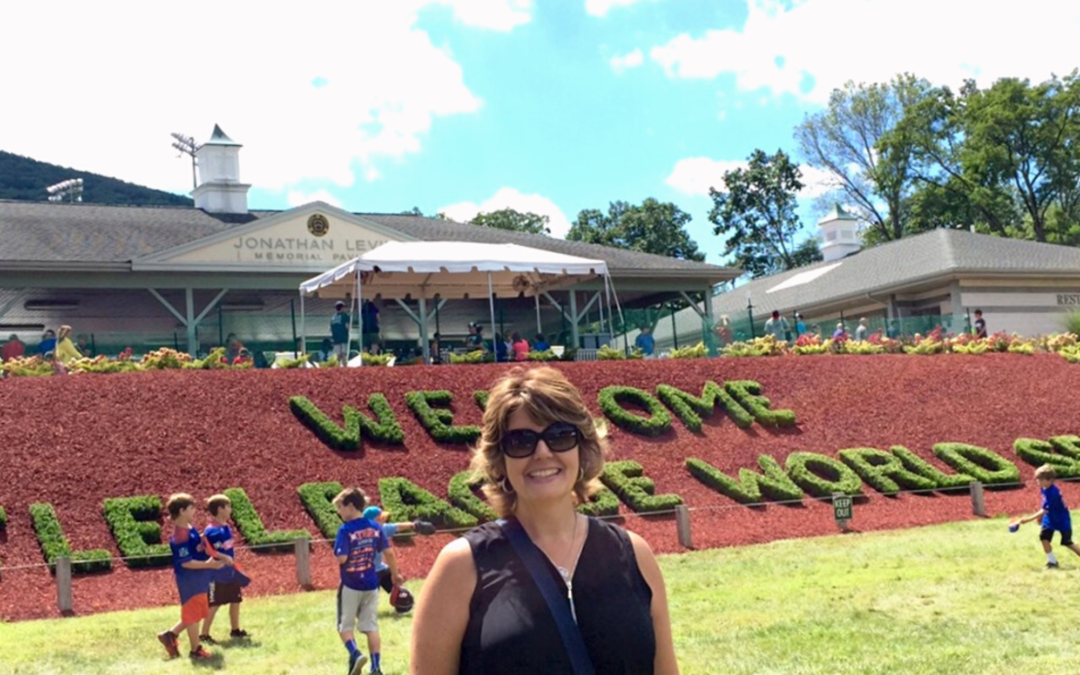 Have you ever watched the Little League World Series?

It is some of the best baseball you’ll ever see.

There’s the thrill of victory when a team wins in extra innings under the lights at the beautiful Howard J. Lamade Stadium.

The cheers, exuberance and excitement from fans, families and players around a spectacular play or a home run are unlike anything you’ll experience at a big league park.

But then, the tears that come from defeat as these 12-year-olds realize that this trip to their field of dreams is over, breaks your heart.

And best of all, the sportsmanship the players show towards each other as they all take in this once-in-a-lifetime experience renews your faith in kindness.

But it’s extra special to my family and me.

The Battle In Left Field

First things first, you have to understand that baseball runs deep in my family.

My Grandpa Metzger, my Mom’s dad, was one heck of a ball player.

He was offered an opportunity to play with the Chicago White Sox back in the 1940s.

But he turned it down because he didn’t think being on the road and away from the farm was the right decision for his young family.

So, instead of playing in the big leagues, he played ball on a local team for fun.

And one of those games brought him against none other than baseball legend, Ted Williams.

In 1943, Williams left professional baseball and enlisted in the Navy. He was training at NAS Bunker Hill, Indiana, and played on their ball team.

So on a sunny afternoon in rural Indiana, Ted Williams’ team faced off against my Grandpa Metzger’s team.

Both men played left field. Both men batted 4th, or cleanup, in the lineup.

And both men had hits and home runs that day.

But only one made an error.

And it wasn’t my Grandpa!

I remember my Grandpa being a great storyteller, so you can imagine the fun hearing him tell this tale!

My Dad grew up in a small town in Pennsylvania called Newville.

So it should come as no surprise that the small community rallied behind its sports teams.

The Newville team made it to the finals of the Pennsylvania State Championship game. (This achievement continues to be such a moment of pride for this little town that over 70 years later, it’s still mentioned on their website!)

This is when my family’s connection to the Little League World Series really begins.

The championship game was played in the stadiums in Williamsport.

And that’s where it happened.

My Dad stepped up to bat, in front of a packed stadium, wearing high-top sneakers (not cleats) and smashed a walk-off home run.

I love looking at this picture of him crossing the plate.

Look at the crowd in the background… gosh, that must have been amazing to hear the cheers!

I love the photographer rushing up to take his picture.

I love the looks on his teammates’ and coaches’ faces.

And if you look closely, while you may not see his face, you can tell that my Dad is smiling.

I love that most of all.

My Dad didn’t talk a lot about his childhood. I think it’s a place where he existed. But I’m not sure it was a childhood of wonder, excitement and happiness.

Except on that day. At that moment.

My Dad once told me it was the happiest day he could remember from his childhood.

And that statement was one I never forgot.

Especially after my Dad died in 2010.

My Dad died from pancreatic cancer in 2010.

I had many generous friends ask me if there was a cause or a charity they could contribute to in his honor.

I was flattered by the requests.

And the idea of contributing to something in my Dad’s name got me thinking.

Thinking about Little League. Williamsport. And that memory.

So, I put together a series of fundraisers with the support and help of many of my QVC vendor friends.

When I contacted Little League and shared my Dad’s story and my desire to donate, they came back to me with an amazing proposition.

They wanted to use the photos of my Dad as part of a permanent fixture in the newly renovated World Of Little League Museum.

The museum featured a rotating collection of photos from families and players throughout the world.

Each section of the museum is an “inning.” And the 7th inning is called the Richard “Hank” Bauer Jr. Photography Exhibit.

As I’m sure you can imagine, there is a lot of emotion around this for my Mom and me.

For me, there was no other option.

The best way I could honor my Dad after his death was to bring his memory and moment back together again where it all began.

Year After Year At The Little League World Series

Williamsport, Pennsylvania, has become a favorite place for our family.

We make the trip almost every summer to catch some great baseball.

This has been really meaningful for me to share with Trevor, who many of you know, has played baseball since he was 4!

Trevor threw out the first pitch for an LLWS game when he was 9 as part of the opening weekend of the World of Little League Museum.

And of course, whenever we’re in town to watch the games, we always stop in at the museum.

Whenever we go to “see” Grandpa, it warms my heart.

I hope this is a place my kids will bring their kids one day to share this special memory.

Trevor’s Turn To Travel To Williamsport

Trevor has played on a lot of baseball teams.

And when he was 12, his Little League team made a run at Williamsport, just like his Grandpa.

I swear, my Dad was on Trevor’s shoulder for every at-bat.

And Doug’s Dad too.

Doug’s Dad died young, so the kids and I never met him.

But he and Doug spent a lot of time together on the baseball field as he coached many of Doug’s teams.

So lucky Trevor had 2 Grandpas in Heaven cheering him on.

After winning the districts, the boys were off to Carlyle, PA for sectionals.

Carlisle isn’t that far from where my Dad grew up.

And the boys did it again, winning the sectionals which sent them off to chase the Pennsylvania State Title.

Our small team played well but didn’t have it in them to win the State tourney.

But it was such an exciting ride, especially with my Dad’s connection to this same path.

Trevor is now 17 and a baseball player through and through.

He plays on various travel teams and his high school team.

Ask him what makes him happy and his response is always, “playing baseball.”

One More Story About My Dad

You may have noticed that the name of the exhibit named after my Dad is Richard “Hank” Bauer, Jr.

Hank is not my Dad’s middle name. But it was what his teammates called him, referring to Yankee slugger, Hank Bauer.

I guess those Newville boys thought my Dad was a slugger too.

Someone sent Hank Bauer some newspaper clippings about my Dad, and out of the blue, my Dad was sent a letter from Hank along with a signed baseball from the 1952 Yankees!

That ball has signatures from Joe DiMaggio, Mickey Mantle, Yogi Berra, and of course… Hank Bauer.

You might think we have a gold mine with that ball, right?

Well, as a proud 12-year-old slugger, my Dad decided his name should be on that ball too, so as a kid, he signed his name on the ball, basically covering up most of Mickey Mantle’s signature!

Oh well! It makes for a great story, right?

Some of our family’s most special memories are of being together in Williamsport for the Little League World Series.

You might be lucky enough to be cheering for a team that is actually playing.

Or, you may just want to have some old-fashioned fun watching kids play their hearts out.

But no matter what the situation, a trip to the Little League World Series is something I can’t recommend highly enough.

And when you stop in at the World of Little League Museum, be sure to tell my Dad, “hi!”

From my home plate to yours,