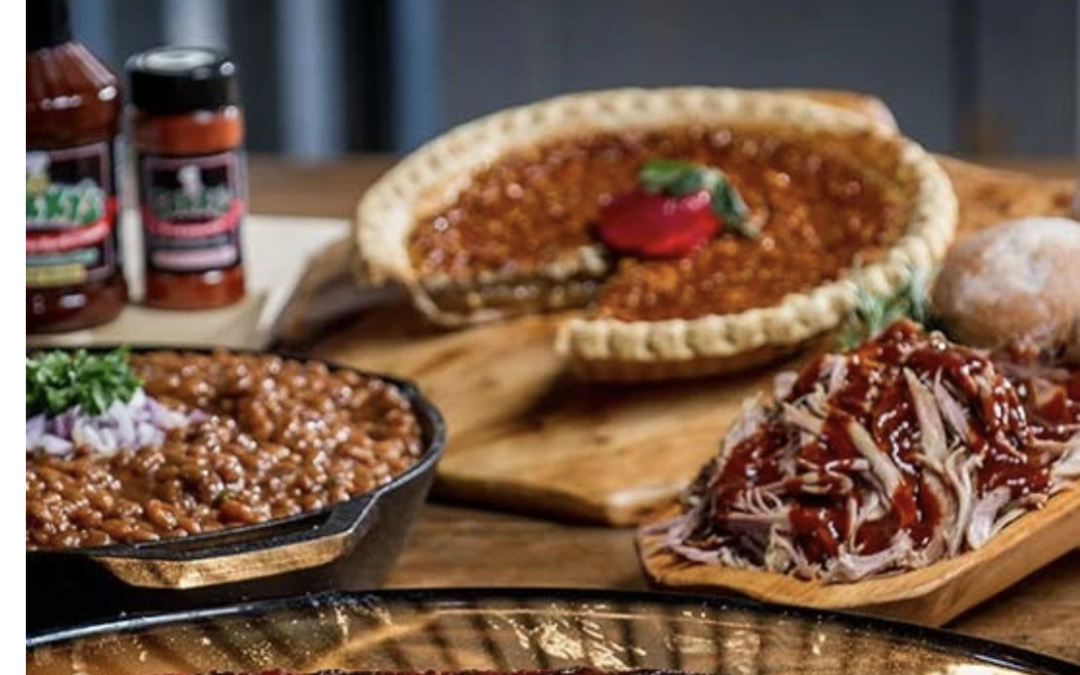 I’m so excited to be working with Corky’s BBQ! In fact, when I started exploring the idea of adding a food category to justjillshop.com, Corky’s was one of those brands I had on my wish list.

I wanted to offer Corky’s BBQ to my customers at Just Jill because I know how busy life can get. We’re all tired. And no matter how much you might like to cook, you have to admit, it’s really nice to have someone else help you with dinner detail every once in a while!

Corky’s BBQ has been a staple in my freezer for years. Our tried and true is the pulled BBQ pork or the pulled BBQ chicken. Quick, versatile, and delicious. I’m sharing a few ideas of how I like to use these items for dinners with my family below.

The nice thing about the pulled pork and the pulled chicken is that they are in easy to heat trays and each tray holds a pound of sauced and cooked meat.

The obvious meal is an old-fashioned BBQ sandwich (with extra sauce). Go ahead, slather it on!

Any pizza lovers out there? Another way I love to use Corky’s pulled bbq chicken is on a store-bought pizza crust. I brush some bbq sauce on the crust, add the pulled chicken, a little red onion, some mozzarella cheese, and bake until the cheese is melted.

This is such an easy way to pull together a meal when your kids are telling you how STARVING they are!

One of the most popular appetizers at Corky’s in Memphis is their pulled pork nachos. I’m a total nacho kind of gal, so this idea for a meal is one I lean into quite a bit!

Just top some classic tortilla chips with your favorite toppings and use your pulled pork or chicken as the protein.

To really make it “Corky’s BBQ of Memphis” style, be sure to sprinkle a little of their BBQ seasoning on top too. The crunch, salt, smoky flavor of the meat, and subtle sweetness of the bbq sauce take nachos to a whole new level!

So I totally cheat when I make this for dinner…usually for my son, Trevor. He’s always liked food combinations, so this one was an easy sell!

I do have a homemade macaroni and cheese recipe, but when I make this BBQ version I usually buy a couple of containers of frozen mac and cheese by Stouffers.

I heat up the mac and cheese in the microwave, then when it’s done, I layer about 2/3 of it in a baking dish with the pulled pork, that has been heated through, on top.

After, I add a little more sauce, then add the rest of the mac and cheese. AND THEN? I add some french fried onions on top. I put it in the oven for about 15 minutes at 350… just to basically warm through and get those onions toasty on top.

One of my new favorite ways to use the pulled BBQ chicken is to make “rice bowls.” I just heat up the chicken, and start bowl building!

These are a great way to use things in your fridge or pantry. There are no rules, just layer in what you love!

I like using quinoa as well as rice when I make these bowls. Beans, corn, cheese, tomatoes, cucumbers… they’re all staples for me.

And to kick up your dressing… try mixing half ranch with half Corky’s BBQ sauce. It’s a zesty, creamy kick that really makes the bowl taste great!

While Corky’s is known for their great, low and slow-cooked BBQ meals and kits, those who know, KNOW, that Corky’s has a few delicious desserts too.

If you want to give yourself a break for the holidays, be sure to check out the 3 pie assortment we’re offering at justjillshop.com.

Corky’s Southern Pecan Pie is one of my husband’s favorites. Filled with lots of pecans a buttery, rich, and sweet filling, this over 2-pound pie serves 8-10 people. Just thaw and serve!

And for the chocolate lover, Corky’s fudge pie may look like a big ol’ brownie… but oh, it is so much more!

Sure, it has the consistency of a brownie… but one bite and you’ll notice the smooth and decadent fudge density. I love it with a side of mint chocolate chip ice cream. It’s a tasty combination any time of the year.

In addition to the pulled pork, chicken, and pies, we put together a few more offerings from Corky’s for the holidays.

Be sure to check out our collection of sauces and spice rubs. They make great gifts for the cook or grill master on your list!

And if you want to send a true southern rib meal, you’ll want to check out our Ultimate Corky’s Sampler. It’s a meal in a box, with a main course, side dishes, and dessert too!

Check out all of our Corky’s offerings… just click the blue links below to learn more!

I’m so proud to be carrying a brand like Corky’s at Just Jill. Since 1984, Corky’s of Memphis has been synonymous with delicious, family food. They have won dozens of awards for their slow-cooked BBQ and I’m delighted to share their foods and flavors with all of you!

From my kitchen to yours,